During these unprecedented times, we take our role as an essential service provider seriously and we remain open to service our customers. We understand that everyone is very concerned with the potential spread of the Coronavirus. We’re following the guidelines put in place by the federal government, local governments and the CDC.

Below are some of the safety precautions we’ve implemented to protect our team and our clients:

You might say Collin Wheeler has cluttered up his life with junk. Heck, it’s an accusation to which he’d happily plead guilty as charged.

But while some might dub antiquated elliptical machines, cathode-ray television sets and faded couches from another decade as junk, Wheeler sees hidden treasure. Or shall we say, revenue.

In fact, those things have led him on a most unlikely course to become founder and CEO of 123Junk LLC. 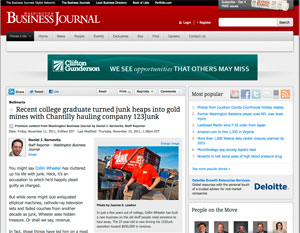 Since its founding in 2008, the Chantilly-based junk removal company has grown from basically a one-man shop pulling in $89,000 a year to a small enterprise with seven full-time employees on track to haul in at least $625,000 this year thanks to a viral word-of-mouth approach to marketing.

“One day I just decided to, as I tell people, take off the shirt and tie and start my own company,” he says. “Ultimately, we’re kind of a needs-based business. Regardless of the state of the economy, what we’re dealing with are people who are in a transitional phase.”

Read the rest of the story at The Washington Business Journal.

To Grow Your Company, Develop Your Team!

Why the Stress of Clutter is Bad for Kids

Learn More About Us

Connect with us and clear your junk

Get a Quote or Schedule a Pickup

After Hours?
Leave us a message

Want to join our team? Learn more about our open positions!

Someone will reach out within 24 hours. We'd love to hear from you!

Your message is on its way!

Someone will reach out within 24 hours. You can also connect with us on Social Media, someone may be able to get in touch faster there.

Check Us Out On Social